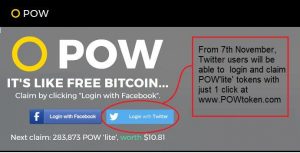 Free crytpo is always a good thing and in time to come could prove to be a great thing. I came across this Powtoken and became fascinated as there was need to buy in to hold some. The only barrier to success is to have an understanding of social media. The company aim to connect their token with the billions of user of social who currently have little interest in blockchain technology.

I am interested in how they will fair as many have the same objective in mind as the potential return is massive to say the least. What is worth very little today can prove over time to be a worthy hold for us Hodlers. 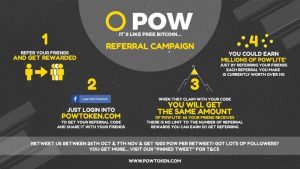 To join the party you only need to register on their website with your Twitter or Facebook. They stated on their site that you can claim twice if you have both accounts. If you feel the compulsion like myself to share with friends you will earn for every claim made, the same amount as the person claiming. A nice incentive, Im watching the space.

WHY IS THERE ANY VALUE IF YOU ARE GIVING THE POW AWAY FREE?

A nice way to think about this is using early telephone networks as an example. When the first telephone networks were developed, the phone companies used to give new customers phones and connect them to the network for free. When there were no other users on the network, the early adopters didn’t get any utility from the phone. It was just a silent object which sat on their hallway table. Distributing the phones was just a cost, with no immediate benefit for the phone company. However, as the network started to grow, and people started to ring each other, the phones’ utility started to increase, making ownership of the phone highly attractive and creating a virtuous circle which lead to almost 100% ownership amongst the public.
The above can be applied directly to distribution of an electronic currency. Right at the beginning there is no real benefit in owning it, but as the network of owners grows, the utility grows massively, meaning that almost any transaction you currently do with traditional money could be done with POW ‘lite’ with zero fees and lightning speed and ease.

← Purse.io an Amazon Revolution
What is Bitcoin →